I want to give you all an update about the legal situation regarding vaccines in Ecuador, since we’re receiving so many questions about it lately, and there is some misinformation being spread in the news media, unfortunately.

I’m fluent in Spanish and I keep up to date with Ecuadorian politics. Because of this, and my length of time here in the country, I can provide some valuable insights that you might not get from reading online news articles about Ecuador.

The short answer is: No.

Claim: Vaccines are mandatory in Ecuador.

Result: Independent fact-checkers at the Fruit Haven community have analyzed the on-the-ground situation in Ecuador and determined this claim to be:

The long answer is this:

Whenever Ecuador tries to implement something, whether it’s new immigration and visa rules or COVID restrictions, they never seem to get it right. First they issue an overly broad and obviously poorly-thought-out edict. This is what you see in the news. Then, almost immediately, they issue a “clarification” or update since everyone points out to them how stupid their original edict was. Then some days or weeks later they issue further “updates”, and the final product is something that only remotely resembles the original edict, that is, if it doesn’t get entirely overturned by the constitutional court. On top of that, the way it will be implemented varies widely throughout the country. It might be implemented very strictly in Quito and Cuenca, but you never even hear of it in rural towns. In general, as you can imagine and as has been true in many countries, various COVID rules are enforced very stringently in the large Babylonian cities, and very loosely if at all in the small rural towns.

A classic but unfortunate example of “fake news.”

Anyways, so what happened recently, near the end of December 2021, is this: The health minister stated that “the vaccine is mandatory in Ecuador for everyone over 12 years of age.” The press jumped on that and many people sent us emails and messages asking about it.

What the press didn’t report is right afterwards, the government issued a “clarification” that there would be no direct action taken against those who did not vaccinate. This is hilarious because in countries where the vaccine has been directly mandated for portions of the population, such as Austria or Greece, there has been a direct penalty, usually a large fine followed by arrest and jail time if you do not pay the fine. So is there really a vaccine mandate in Ecuador? Seeing as absolutely nothing happens if you don’t get a vaccine, I would say there is not.

Another thing that was announced was a requirement to show the vaccine card to enter “public spaces.” This was extremely vague, and nobody knew how to implement it. Random grocery stores in the big cities were requiring it and others weren’t; there was even differences between stores in the same supermarket chain in the same city. Many businesses were simply refusing to enforce it because they could not afford to pay a full-time staffer to stand at the door checking vaccine cards. Most people who work in government have never ran their own business, and it shows. Also, the government provided no guidance whatsoever in terms of how to check cards and which exemptions were allowed. In rural areas, nobody even paid any attention to any of this whatsoever.

A few days later, the government issued further guidance, stating very clearly that “essential” places such as grocery stores, health institutions, schools, etc did not have to require the vaccine, which means we are basically back to where we were before: “Bread and circus” events in large cities such as big concerts, festivals, etc would require vaccine cards but no one else really could. Of course, most people who don’t want the vaccine are also starting to realize that bread and circus is how the state keeps people docile and enslaved, so limiting their bread and circus as a way to encourage them to get the vaccine is hilariously ineffective.

“There will be fire in the streets no matter what the government says,” an unnamed seller of monigotes near the Feria Libre market predicted. “People see that the vaccine rules at restaurants and stores aren’t being followed so why would they be enforced tonight? People are ready to have fun.”

The government also clearly stated in this recent update, that exemptions would be respected. So far, many people around the country are reporting that the VaxControlGroup.com exemption card has been accepted at most places, and the CONUVIVE lawyer’s association card, which is an exemption card that lists all the articles of the Ecuadorian constitution and penal code that such a requirement violates, has also been accepted. Now, keep in mind that you can still go to virtually 99% of all places in Ecuador without ever being asked for a vaccine card, but the few people who are unlucky or dumb enough to live in a large Babylonian city and want to go to a bread-and-circus type event, have been able to show these exemption cards and go on their merry way. 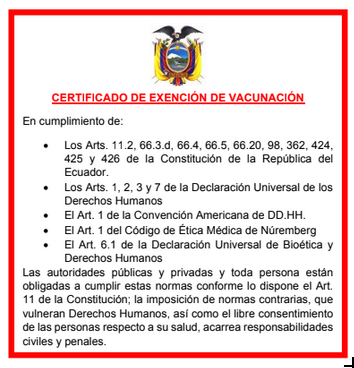 There are some reports of people being denied entry to national government buildings back at the beginning of November. Many of those instances were reported to CONUVIVE, the association of Ecuadorian lawyers who are filing a massive lawsuit against the government, listing all the recorded instances of vaccine discrimination. Also, the Public Defender’s office of Guayaquil, Ecuador’s largest and ugliest city, is pestering government officials by repeatedly sending them official warning letters that requiring proof of vaccination is illegal and violates the constitution and multiple human rights accords. Now, the new edict from December 21st clearly states that “essential” places cannot require proof of vaccination, so we’ve seen how long that lasted. Not only did it not last even a month, but it didn’t even propagate throughout the country beyond a few major cities. 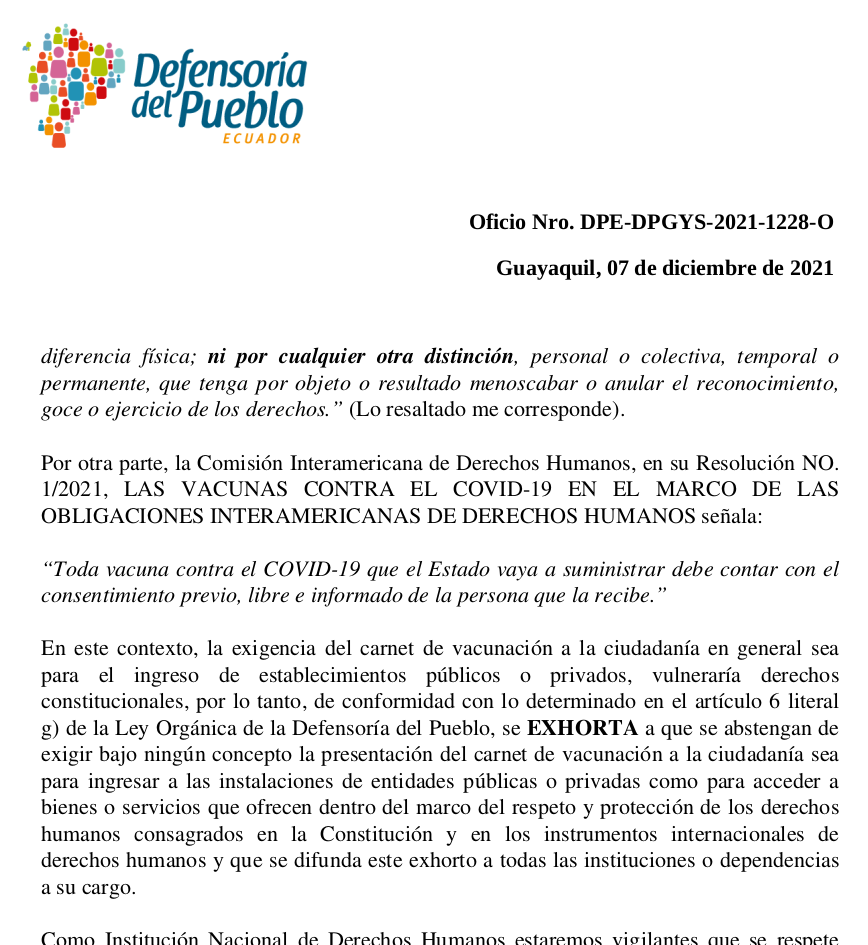 Ecuadorian culture is very entertaining to watch play out on a national government level. Pro-globalist policies are lazily written, poorly thought out, thrust upon the population without even being proof-read by someone with a brain, and then they’re badly defended by the officials who tried to promote them originally. Shortly after, these policies receive multiple “updates” and “clarifications” which often negate their original intention, and even the resultant shaved-down version of the edict or executive order is then barely enforced in most parts of the country. Of course, everything after the initial policy is ignored by the international media, who just want to cheer on the fact that they got another poor third-world country to pretend to go along with their agenda.

Remember how the vaccine mandate for travelers went. Right after issuing it, at the beginning of December 2021, they immediately updated it, saying that a doctor’s certificate stating that a person could not be vaccinated, would be accepted in lieu of a vaccine card. We know people who have successfully used this to enter Ecuador, though be aware, the airport that you fly out of may need to be shown the Ecuador Ministry of Tourism page where they list this requirement. It is almost impossible for airport staff to keep up with the constantly-changing list of requirements for every country, but since it’s officially published by the Ecuadorian government, they will respect it. 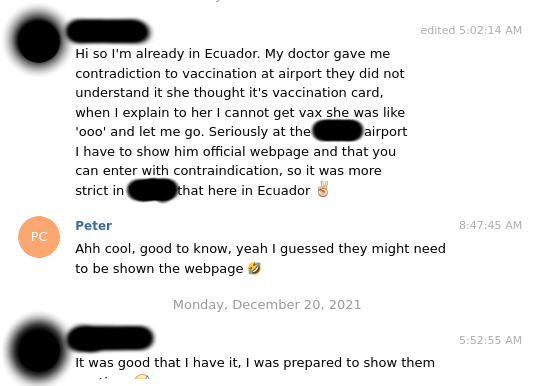 I know some people will have already given up on Ecuador. They will comment below this post, “I’m going to go to Mexico instead, where the president stated that he won’t make vaccines mandatory, ever.” Let’s forget that most heads of state said that in the past and then went back on their word. It’s still not relevant because over a year ago a representative of the international air travel association said that the long-term plan was that by the end of 2021, all airlines would require proof of vaccine for international travel. Fortunately they are a bit behind on this plan, but airlines are starting to talk about it again. In the future, it won’t matter what each country’s individual policy is, because you won’t be able to board any plane without a QR code showing your 7th booster shot in the blockchain system. Impossible to fake. The time to get where you want to be, is now. Enough dilly-dallying. If you are already in a good place to ride out the storm, great! If not, consider making some life changes.